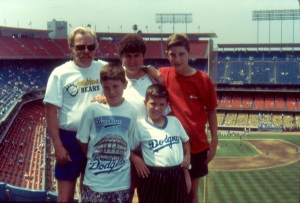 In the photo on the left, I am the only male without a baseball shirt, probably out of protest for not going to Disneyland afterwords and to show I wasn’t a fan of the the baseball park experience.  Of course I look back and laugh because  I love Dodger stadium and the Dodgers, but I get a lot of questions about my loyalty given where I live (Corvallis, OR) and my sudden reemerged passion.  I get asked if I like the Lakers too, but I just answer, nope I kind of hate them.  Why, you ask? Well my Dad wasn’t a basketball fan and how can you not love the Portland Trail Blazers (literally the best fans in the country).

Here is a quick breakdown of why I love them (as told to a friend):
My dad kind of tried to get us to be Mariner fans growing up to no avail. Instead I picked the Braves because Dave Justice was my first baseball card. Later I started to somewhat root for the Dodgers because my Uncle, Dad and Grandma were very big fans.

Obviously 1988 is a very vivid memory for me. My dad and my uncle made a video which some of the kids starred in, having a Dodger fan trying to tell a Giants fan not to jump to their death over the outcome of the Kirk Gibson World Series.

When my Grandma moved to Corvallis shortly after my Grandpa’s death, we became very close. I use to go have lunch and/or dinner with her and then watch a Dodger game. She must have been one of the few people flirting with 90 that had the MLB package. She knew her Dodgers, but spent most of the time complaining about Manny Ramirez’s hair.

So the summer of 2009 wasn’t fun. My grandma died on June 10th and Dad died on August 26th. The last time the Dodgers played the Mariners, since last weekend, was the end of June 2009 and that made going to SafeCo Field to watch the game this year more meaningful.

Between ownership issues and sad associations, I kind of walked away from watching baseball, especially the Dodgers. And then when the Giants won the World Series…I really thought there wasn’t a God for a bit. Last year I watched more actively and then the beginning of this year I felt it was time to be gung-ho. Watching the Dodgers only had good memories now. I got the MLB package first thing (my grandma would of hugged me).

On the trip to L.A. in May of this year was the real moment and will forever leave a lasting impact. Kim’s grandparents and family are all HUGE Dodger fans, they watch every game. Watching the game with her grandparents was so much like watching it with my grandma and then going to the game where Kershaw pitched a complete game shutout was overwhelming. My dad had taken us to a good number of Dodger games growing up, packaged with the promise of Disneyland.  It’s funny that now I would go to Disneyland if promised a Dodger game.

To top it all off, I was finally able to keep with my dad’s wishes to spread some of his ashes on the field of Dodger Stadium. That was a very emotional moment for me. We spread his ashes at OSU’s ballpark too, but this meant more as I was in the right mindset to appreciate it.

I know that this is way more than you wanted to know, but I thought I would explain myself. In the end the Dodgers are more than just a team for me, they are a constant reminder of the Dodger baseball passion that lives in my family and at times I feel like my Dad and Grandma are present watching the game with me. The Dodgers not only symbolize how I have moved on, but also how I carry a healthy remembrance of the fans that have left us. Go Boys in Blue! 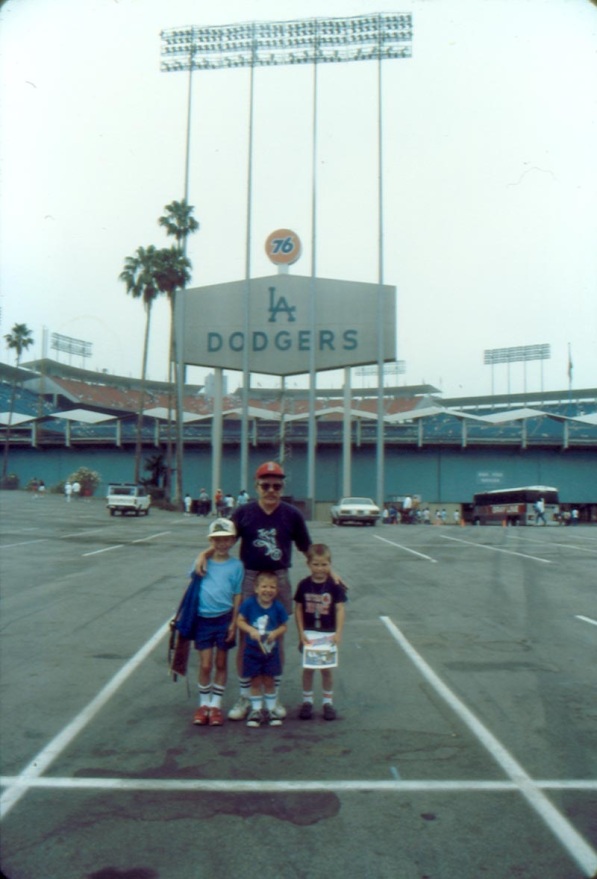 My dad and his Blue Crew Boys.

One thought on “A Family Tradition: The Boys in Blue” 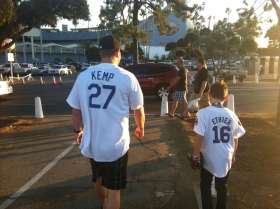